I found this interesting video of a discussion of the Power of Cult Television programs. They talk about the power of TV shows such as Buffy the Vampire Slayer and Doctor Who. Anyone who in interested in the power of Television, or has been affected by a program should take a look at this.

Find out more at http://yourfriendelle.blogspot.com

A Sci-Fi museum?!? Great Scott! Why haven't they done this before? Hollywood being Mecca of the film and television industry, one would think that there would be already be one here. Sorry to disappoint, but there is no such museum here. However, Huston Huddleston and the Board of Directors for NewStarship.com have come to (the rescue) fill this need!

Find out more at http://yourfriendelle.blogspot.com

From his first introduction to me in "The Voyage of the Damned" in season 4 of Doctor Who, I have loved Bernard Cribbins and his portrayal of Wilfred Mott. The spunky, compassionate, and courageous character was built by Russell T. Davies, but brought to life by Cribbins.

BBC Worldwide and Fathom Events are celebrating David Tennant by bringing Doctor Who and the premiere of BBC Earth’s Wings 3D to the big screen!

Whovians! I am thrilled to share with you a Looks for Less set for Doctor Who! Wear What You Watch was kind enough to put these together for you!

Time for the Doctor Who Party! Now that I know you've all had your Sherlock parties! I love to decorate but don't like paying a whole lot for it so I've once again planned this around cost. Imagination and creativity is again in order. Below, I've put together a list of ideas for a Doctor Who inspired party. Take from it what you will, leave a comment below if you have any suggestions or if you do have a Doctor party I want to see pictures!

Hello, my name is Esteban Nicolas Rivera, Graduate Teaching Assistant of the English Department of the University of Cincinnati. I am conducting a research study on community sustainability when faced with loss in Doctor Who. If one wishes to participant in study, download the attached informed consent sheet and state at beginning of your comment that you wish to be a participant https://drive.google.com/file/d/0B4MAUWGTva4lUDV5WUk0VVJKUGM/edit?usp=sharing. If you want to comment but not be considered a part of this study, then please state at the beginning of your response. If one has any questions concerning rights to privacy/confidentiality or general questions about the study, one can reach me via email (riveraea@mail.uc.edu) or by phone (513)556-5924. http://www.artsci.uc.edu/departments/english/profiles/nicholas_rivera.html

Rejoined the Who-dom in '05, but I found the romance of Nine and Rose to be a bit rushed. It wasn't until Ten calmly stepped onto the scene with a, "So where was I? Oh right. Barcelona!" that I thought Nu-Who was going somewhere. For those who haven't seen the Ten years, there is something to be said about the development of the Doctor's character. Maybe it's because he was there for four years, but Ten's final line captured that perfect moment between Doctor and Fan. He didn't want to go and I didn't want him to. I was crushed in the face of a new Doctor whom was as alien to me as he was to the Who Universe. Who was he? What was he? How can he fill in for Ten? Is he meant to replace Ten?

For those who've experienced losing "your" Doctor, how did you cope and just how do you remain on his side when he is dead and we have a new Doctor in his place? Open to fans of any Doctor 1-11. 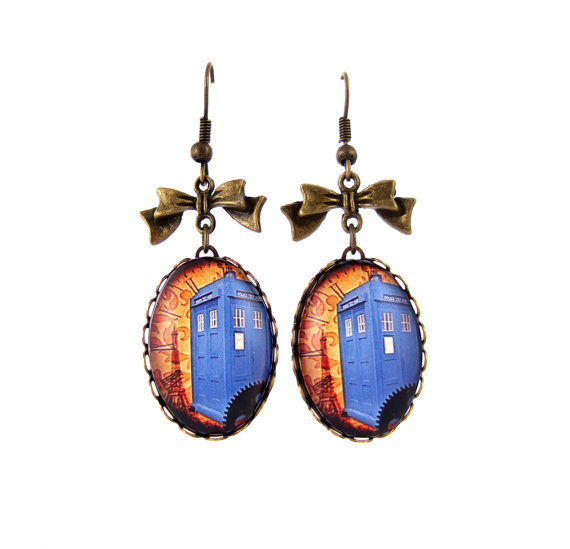 When I was researching the Leemmy post I discovered Fragile Elite Design. So you can thank Leemmy for this! Any who, Fragile Elite is the most creative U.K. centric designer jewelry I have seen in a while! Being that I'm obsessed with all things U.K. you can see why I was immediately drawn to Fragile Elite. Best of all, it's reasonably priced!

Synopsis:
After
parting with the 10th Doctor, the recently regenerated Master is
hell-bent on taking his revenge on Rassilon. Will the Doctor and Donna
be able to prevent the Master from taking part in full-filling a deadly
prophesy? "Warning":Benedict Cumberbatch Master with some Sherlock
mannerism.

This story belongs to a series about the 10th Doctor and the Master. More information can be found HERE.